All I do nowadays is to weigh off the leftover stew - today around 350g, then estimate how much wheat gluten I'll need - and I went for 150g.


To the flour I added stock cube, nooch and curry powder - which I then taste to see how flavoursome it is. I then mixed the two together and immediately it was obvious I needed more wheat gluten - so I weighed another 100g and flavoured it appropriately. I added half of this to the mix, which, after I'd kneaded it a bit, turned out to be just right. The leftover powder was placed in a small tub and left in the bag of flour for next time.

I divided the dough - now weighing 600g - into two and rolled one half into a flat disc, which I dry fried for 7-8 minutes each side:

The other half will be baked next time the oven is on - probably Friday evening. That will provide enough for two roast dinners - or one, with the rest cut into chunks and, once again, added to a chilli non carne.

Seitan is wheat gluten powder (available online from the Low Carb Megastore ) mixed with something tasty into a stiff dough. The tasty stuff (ragu sauce, lentil curry, dried apricots [soaked overnight], or whatever) can be mashed or blitzed with a hand blender. This latter produces a thick slurry to which you add gluten powder. I generally work on the ratio of 2 parts slurry to one part gluten powder - but you may have to add either more GP or liquid. In my experience you need to heavily spice your slurry - over-spice it if you like.

So, you make a tasty ragu sauce, say (or you have some leftover, which is what I tend to do). To this you add more bouillon powder, mushroom sauce, soy sauce, curry powder or whatever. The reason for this is that the gluten powder has no flavour - so if you don't add extra flavour, your seitan will taste bland.

Once this is made it can be boiled, steamed or baked - but the best way to treat it IMO, is to fry it. I tend to divide it into 150g pieces, press them out into a cutlet - about as big as your hand - and fry them for about 6 minutes each side. Or I slice it  into chunks and again, fry it lightly for 10 or so minutes. Sometimes I do both with one chunk of seitan. It will keep for ages in the fridge.

Wednesday 4th January.
I had two thirds of the cutlet for dinner last night, along with some curried wedges, and found it to be slightly dry and lacking in texture. I thoroughly enjoyed it, but feel it needs a bit of a tweak - perhaps some mushed up kidney beans or lentils...

However, I had the other third chopped up into chunks in a chilli non carne and it was absolutely perfect!

I cut the slices of seitan, once cooked, in strips, which I placed back in the frying pan to sear the cut edges, then I left it on a low heat to dry out. Once they'd dried completely I broke them into chunks, which I added to the chilli. (By drying out the chunks, they soak up the flavours of the chilli sauce they are simmered in.) They were exactly what I was looking for - success!

Tuesday 3rd January.
I've always been concerned about the vagueness of my seitan recipes - blitz a stew-type dish, add gluten powder and flavouring using a lot of guesswork.

Kneaded and flattened out into a cutlet and fried for about 7 minutes each side.

I perhaps over-seasoned it by a tsp of veg stock powder, but it's very tasty.

I shall have most of it with some curried wedges and use the rest in a chilli non carne tomorrow.

Now I know exactly what to add to gluten powder to get flavoursome cutlets and chunks!

Started off with a veggie ragu on Monday - and added curry paste, pesto, red kidney beans and had it with rice yesterday.

To the leftover curry - around 400g - I added a teaspoon of curry powder, 1 teaspoon bouillon powder, 1 dessertspoon each soya sauce, mushroom ketchup and Worcestershire sauce (Life). So I had around 430g by now, which I blitzed almost to a thick sauce. To this I added 200g of gluten powder (150g first, then another 50g) and mixed it into a spongy dough.

Half of this I've put in the fridge for later, the other half I divided in two and shaped into cutlets.

I wanted to try something new, so I thought I'd use dried apricots and make a sweet seitan.

I boiled up 200g of dried apricots and left them for an hour. Then I drained them and blitzed them. By now they weighed 340g and I added roughly 160g of gluten powder and mixed into a dough.

I weighed off 160g of this and chopped it into small dice, which I gently fried for a little while. Sliced mushrooms also went into the frying pan.

While the seitan was cooking, in a saucepan I fried an onion with as sliced pepper, some celery and cabbage. I added cayenne pepper, turmeric and smoked paprika and a little asafoetida instead of garlic. Then I added a little water and simmered until the veggies were cooked.

In went a tin of chick peas, a carton of chopped tomatoes, dried herbs plus the seitan and mushrooms.

Simmered for about 30 minutes until the brown rice was ready, and served.

Bit disappointed with the chick peas, from Sainsbury's. They were of mixed texture; some were quite crunchy and others were cooked softer - more to my liking.

All in all, though, this was very tasty. I've just had some for my supper, and already the flavour has improved - I'll have the rest tomorrow with some curried wedges.

I simmered this into a fairly dry mix and weighed off 600g. To this I added 170g of gluten powder and mixed it into a dough.

I took a quarter of this and moulded it into a cutlet shape which I fried for about 6-8 minutes each side and had for dinner with curried wedges.

The rest I divided into 3 and formed them into sausage shapes, then I wrapped them in foil, twisting the ends like a Christmas cracker. 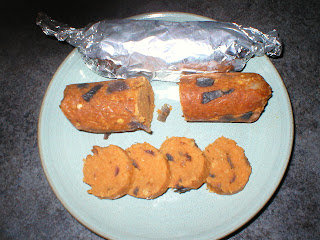 I steamed these for 40 minutes and finished up with 3 cracking, tasty sausages!

I haven't been able to stop nibbling these, as you can see! So I'd better get them in the fridge.

I'm told they keep for ages in the fridge.

So simple to make - and well worth the effort.

Sometime over the next few days I'll make a pizza and use the sausage as you would pepperoni (although they need to be a bit hotter, really; next time!)