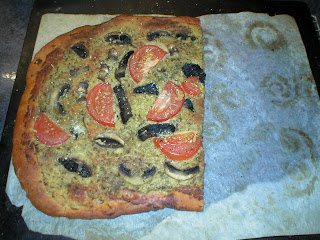 I ate a third before I remembered to take a pic!:( (No prizes for guessing what the baking parchment had previously been used for!)

Method:
1. Place the dried ingredients and the s-d-tomatoes into a mixing bowl. Stir the yeast into the sauce until it’s dissolved (dried yeast takes a little longer to dissolve than fresh) and add it to the flour. Pour the oil into the liquid.

2. Have a little water to hand to add if necessary, remember, it is better for your dough to be wetter (slack) rather than drier (tight). Begin to mix by stirring the ingredients together with a knife, starting with the yeast, cutting through the dough. When it gets too stiff for the knife, use your hand to squeeze the mixture together. As it forms into a solid mass, keep turning it over and pressing it down to pick up the flour at the bottom of the bowl – but make sure it stays soft. Don’t be afraid to add more water to keep it soft! When all the flour has been mixed in, wipe the bowl around with the dough, turn it out onto the worktop and begin to knead.

3. Knead by stretching the dough out, folding it over, stretching it out and so on and so forth. Do this until it is smooth – and stop before you get fed up!

5. Spread the pizza base(s) with a layer of pate, then a layer of pesto, and finally a layer of houmous. Place slices of tomato and mushroom on top and sprinkle with herbs and black pepper.

6. Leave them to prove until the dough has become puffy at the edges.

7. Place in a hot oven, 220C, 425F or gas mark 7 for 15-20 minutes, turning round halfway through if necessary. When they're done the pizzas will lift up all along one side when you check underneath, using a palette knife. The bottom should be browning from the edges.

This made a fairly sticky dough which I rolled out, using stacks of flour, to the size of my baking tray (see pic above). I covered this with a layer of pesto and a rich tomato sauce. On this I placed slices of field mushroom and another four s-d-tomatoes - this time cut into strips - and I finished it off with fresh basil.

This recipe for the base is my favourite at the moment. It makes for a very 'short' crust - almost like shortcrust pastry!

I figure it's the oil from the tomatoes which give it this effect. I reckon this recipe would make fabulous  grissini (breadsticks)!

Different toppings:
I always like to try different toppings. The three pizzas I made in the chiminea today (25/4/11) were topped with:
1) My favourite standby, mushroom pate and pesto plus sliced mushroom and tomato
2) Spicy tomato sauce and houmous plus grilled sweet peppers from a jar
3) Spicy tomato sauce and nutritional yeast plus peppers
Posted by Paul Youd at 20:25 No comments:

Using the oven and a cloche to prove your bread

I needed some bread in a hurry for some visitors to take away with them yesterday, so I made a batch of white rolls.

Using the 'undercover method', and the oven (plus a good amount of yeast), to help with the proving, I was able to make them in under an hour - 55 minutes, to be exact.

I made the dough (500g flour, 315g water and 15g of yeast) and shaped it into 8 rolls, huddled together on a heavy steel baking tray. I covered the bread with a stainless steel roasting dish and put it into the oven, switching it on to 220C.

I gave it ten minutes covered, and a further 10 minutes uncovered (turning the tray round 180 degrees to ensure even baking).

And they were done:

Later that day, needing some more rolls for the rest of the family, I thought I'd try leaving them in the oven from the start. These took only 45 minutes this time, and, while the rolls rose nowhere near as much as the first batch, they were still edible if that's all the time you have.

Even when I make my normal daily bread I often resort to putting the covered bread into the oven for short blasts of heat. With the cover on, I give them two minutes in the oven, then leave them out while there is still some heat in the tray and cover. Normally I only need to do this a couple of times before they're risen sufficiently to bake.
Posted by Paul Youd at 11:04 No comments:

(9th April 2011. I've added my latest thoughts and adjustments at the foot of this recipe.) 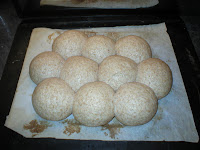 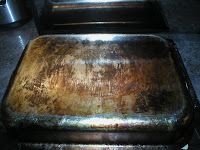 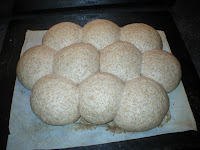 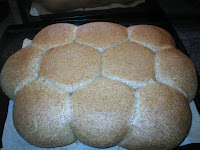 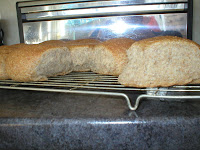 The pictures show:
1. Wholemeal rolls, just after they've been shaped and before proving - covered with the roasting tin (2).


3. Now risen (you can see how they've spread to the edge of the baking parchment) and just about to go in the oven. Of course I replaced the roasting tin over the rolls.


4. After baking. The rolls completely filled the roasting tin, but the pic doesn't quite capture how flat the top and side of of the rolls actually are.


This made a soft and sticky dough which I kneaded at intervals several times – and then left (in a food storer with lid, saves messing about with tea-towels, etc) whilst I had dinner and watched a bit of TV, so it had rested for about two hours.


I was looking to make this into 100g rolls (after baking), so, with a little over 1200g of dough, I divided it into 10 pieces and shaped into rolls.


These I huddled together on some baking parchment, placing 4 down the middle and 3 on each side. Flouring my hands I held the paper with one hand and pushed the rolls gently in towards each other. My intention is to bake this as a loaf, then split the rolls apart and freeze them when cool.


I have to say they rose as good as, or better, than any I’ve made before.


Undercover method:
When a yeast-risen batch of dough is placed in a hot oven, the bread will continue to rise until the yeast is killed by the heat and a crust is formed.


Enclosing your bread inside the oven - either under a cover, or inside a casserole dish with a lid - slows the formation of a crust, and probably also prevents the heat from killing the yeast as quickly as it might otherwise do.


Elizabeth David mentions this method, and I remember my dad (a Master Baker by trade) telling me that this was one of the tricks bakers would use to enhance their loaves when entering competitions.


For the cloche method, you need a rigid baking sheet and something to cover your bread with.


I’ve been using a large roasting tin, since I make rolls rather than a loaf. But a large Pyrex bowl would do the trick.


You need to ensure that your baking tray is larger than your chosen cover, so that the bread is enclosed.


Here’s a fascinating conversation on both the casserole dish method and the ‘cloche’ method:


And another one here.


10th April 2011.
My latest thoughts and adjustments to this recipe:
I now add 60g of ground flaxseeds along with the flour - for the omega 3, mainly, but they also add flavour and texture to the bread.


The amount of dough I make now comes to around 1400g, which makes 12 rolls weighing roughly 115g.


I've also changed the timing of the bread, I take the cover off after 10 minutes, then give it ten more minutes uncovered.


Note: This morning, making some white rolls, the bread was ready to go into the oven before I'd even switched it on! I'd left it, covered with the roasting dish, in the warm sunlight. So I put the bread in a cold oven. It took longer to warm up, as you'd expect, so I had to keep an eye on  temperature and timings, but the bread rose wonderfully.