Finally broke away from my tagliatelle rut, last night, and made a lasagne with my homemade pasta.

I made it with all wholemeal and added half a teaspoon of bouillon powder, a heaped teaspoon of nooch, and the end of a spoon of curry powder. I forgot the EVOO, but it didn't seem to make any difference - probably won't bother with it from now on.

The lasagne was the best I've ever had, simply scrummy - and I've still got half of it left.

I have to say it was very satisfying, cutting the sheets to the required size for the pot - so that only one sheet was needed for each layer!

Boy! Am I getting good at this!

Came home this evening to find my wife had made me a vegetable pasta sauce - so I set to and made some pasta - 100% wholemeal this time.

I put a pan of water on, found the scales, then the flour, the bouillon powder, the nutritional yeast and the cayenne pepper.

I measured 50g flour and added 3/4 of a teaspoon of stock powder, a heaped teaspoon of nooch and 1/4 tsp cayenne pepper. I mixed this together and added 30g of water and a glug of EVOO. This came together as a dough very quickly - which I kneaded a couple of times.

4 minutes after I began, I formed the dough into a bun-shape, dredged it with flour (s/raising this time, it's a quarter the price of the w/meal) and rolled it out thinly.

To try and encourage a square shape, I pick the dough up - left hand to the bottom left hand corner, right hand to the top left hand corner; then, turning the dough over, I bring my right hand over to the right hand bottom corner. Then I spread with flour again, roll out a couple of times and repeat the turning over procedure - only this time on the right hand side. Once I've got it to the correct thickness - which I check by folding the dough three times (giving me 8 layers) and measuring it - it should be about 1cm thick. Which makes the dough roughly 0.125cm thick.

[Does this make any sense, folks? It's the first time I've tried to write down what I actually do. Feedback welcome, please.]
I then take the pizza wheel and cut it into roughly 1cm wide strips. Today I cut 23 strips, so the square of dough was approx. 23cm square.

The pan of water was now ready and in went the strips, one strip at a time. 3 minutes later - 16 minutes after I began - it was nearly ready. Only then did I realise I hadn't warmed up the sauce. That took a couple of minutes - but I finally sat down with my meal 20 minutes after I started!

The wholemeal pasta was absolutely fine - I shall do it like this from now on. And adding flavourings to the pasta makes it a whole new ball game - one that I can play about with to my heart's content!

I'd just about given up on pasta I was so bored with it - but now I embrace it willingly. Must try lasagne and ravioli very soon!


Tuesday 28th August.
Two of our grandchildren are staying with us for a few days - and as soon as Olivia (9) heard about my pasta-making and saw the pics, she wanted to make some herself. Not tomorrow, not later today - but now! So we're having pasta for lunch! 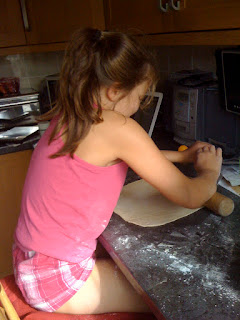 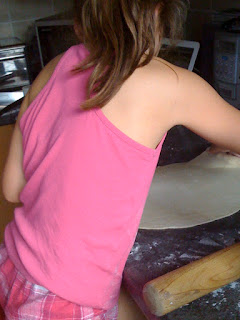 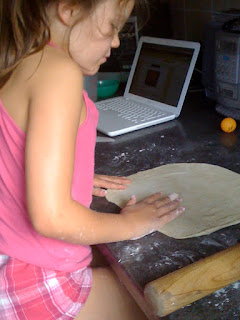 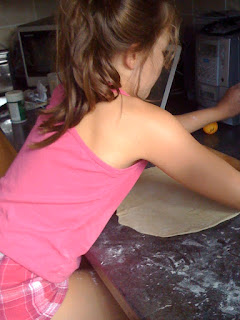 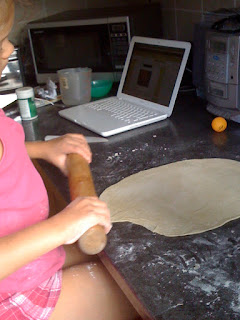 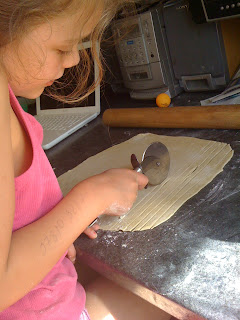 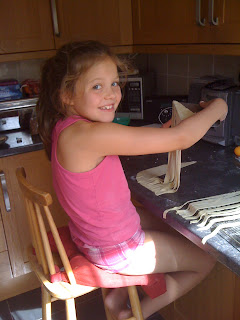 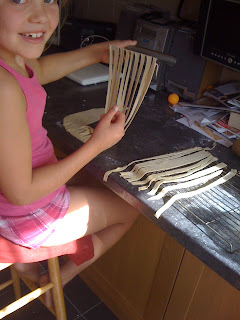 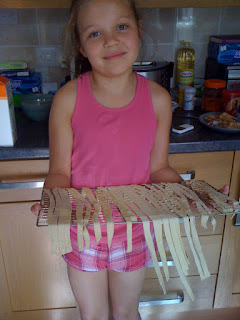 Once the pasta was cooked, it was mixed with chopped tomatoes and served with grated cheese.

I came home from the cricket to find my wife had made me a vegetable pasta sauce - which smelt wonderful!

So I set to to make some more pasta. This time I thought I'd make it with 50% wholemeal - using half Dove's organic wholemeal and half a basic strong white flour.

I made too much for one meal last time, so I divided the ingredients in half:
50g wholemeal and white flour
3g bouillon powder
30g water
5g EVOO

Mix together, knead for a few seconds then roll out into a large circle. With the confidence gathered from the last time I made pasta, I rolled the circle out as big as last time - but, obviously, a lot thinner. I folded it into 8 to check the thickness - it was roughly 1 cm thick. So the dough was about 1.25mm thick.


Once again, using a pizza cutter, I divided into long strips - about 1cm wide, or less.


Boiled some water in the kettle, poured it into the pan, and, when it was boiling I tipped in the pasta. Three minutes later (as the video said! :) ) it was done.


I don't know if it was my wife's lovely sauce, or my homemade pasta - but it was a thoroughly gorgeous meal!

It probably took me about 15-18 minutes. I reckon I can get it under ten - which is quicker than cooking dried pasta. Just have to remember to put the water on to boil before I start making the pasta!

One last comment. I dropped a strand of pasta in the pasta sauce - and it cooked perfectly well - again in three minutes! Now, I'm thinking, could I cook it all in there? Hmm!

I did a bit of googling, of course, and came up with this video, which gives a recipe and also demonstrates a small variety of shapes.

Mixed into a fairly stiff dough - adding more flour until it was the right consistency (not as soft and squishy as my bread dough) and left for 10 minutes whilst I tickled up my wife's vegetable pasta sauce. She makes a fairly basic sauce to which I add a good dessertspoon of vegan pesto (Meridian is my preference), some dried basil and a fair dollop of WI pepper sauce.

I rolled out the dough using plenty of flour, turning and refreshing the flour and rolling out again:

Then, using a pizza cutter, I cut half of the dough into strips, to make tagliatelle, flouring it first:

I then started playing about with the remaining dough - cutting it into small shapes as per the link above: