A PERFECT DAY FOR DUMPLINGS

There I was, this afternoon, watching Somerset vs Yorkshire - and, gripping as the cricket was, there was no denying that we were cold!

I had on 6 layers, plus a scarf, hat and gloves - and I was still freezing. I found my mind wandering towards dinner: my wife had made me a veg stew, and I thought, what I really need when I get home, would be some dumplings to go with it. Perfect for this weather.

The stew was full of flavour - half a dozen local, in-season veg + a tin of chopped tomatoes gives a wonderful result. All it needed were some dried herbs and some garlic powder. However, I'd purchased a packet of Morrison's vegan sausage and quite fancied a couple of these cut into chunks in the stew. I also added a handful each of green lentils and butter beans from the freezer. The sausages are quite soft, so I dry-fried the chunks to harden them up. (Better to chop them when they're still partly frozen.)

Dumplings: Here's the proper recipe, with all the measurements, but today I simply put 3 heaped dessertspoons of self raising flour in a bowl, along with 1/2 teaspoon of bouillon powder, some garlic powder, a shake of mixed herbs and a teaspoon of nooch. I added a little cold water and a dsp of olive oil and mixed into a soft dough. I divided this into 4, and shaped them into bun shapes, which I then lowered into the stew. 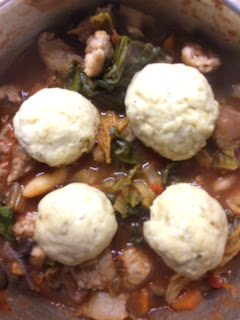 I gave the dumplings about 20 minutes, took one out and very carefully - because they're very delicate at this stage - sliced it in half to see what it looked like:

I had the stew and a couple of dumplings with some new potatoes and spinach (I've just read somewhere that spinach releases more nutrients when it's cooked then when eaten raw), and it was just what the doctor ordered! Absolutely full of flavour, and it reminded me that I should  have dumplings more often.
Posted by Paul Youd at 00:42 1 comment: 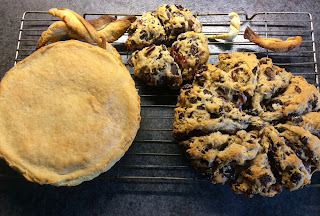 The pie is a bilberry pie (with pastry nibbles) and the fruit loaf has sultanas, dates, cranberries, cherries and chocolate. It was for a coffee morning today - the bilberries are from Lidl (frozen).

Saturday 7th April 2018
Here's another bread using the ingredients for the pop-up pie below. Made them for dinner along with some homemade baked beans (using red kidney beans) and broccoli. 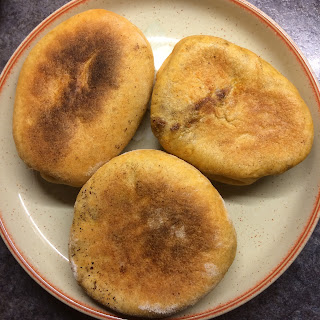 Divid the dough into golf ball sized balls and roll into circles about 10cm across. Place a dessertspoonful - or thereabouts - of lentil and potato curry in the middle and draw up the sides, pinching them together over the top of the filling. Turn over and gently roll out flat. Place in a dry frying pan over medium heat for 5-6 minutes each side.

Here are some other suggestions - pasties, etc - with pics.

Thursday, 5th April 2018
Did a quick breadmaking demo for the potluck - showing just how versatile s/raising flour is.

Before you start, put your oven on at 220C and prepare a baking tray - either oil your tray or line it with baking paper (which can be used over and over).

Method:
Place all the ingredients in a mixing bowl, stir with a table knife until the mix comes together, then, using one hand, gather it all together into a dough. Tip the bowl up to let gravity do some of the work and wipe the dough around, picking up any stray bits. Add more water or flour as necessary to achieve a smooth, workable dough.

Knead (flatten and fold) the dough a few times to get all the lumps out, then form into a flat disc about 2cm thick. Cut a cross into the loaf, cutting almost all the way through. Place straight into the oven for 15 or so minutes, checking after about 10 - you may need to swap shelves or turn it round 180 degrees to ensure an even bake.

A soda bread is ready when: there is colour across the bottom; a skewer comes out clean; and it breaks apart cleanly. If there are strings of dough stretching between the two halves, it needs a further few minutes in the oven.

Pop up pie:
Make another dough, using the same ingredients (you may need to adjust the quantities to the size of your pie dish). I often use bouillon powder instead of salt, and add paprika, or curry powder in with the dry ingredients.

Cut off one third - for the lid - and, using flour quite liberally, roll the  larger piece out big enough to fill your pie dish. When you get close to the right size, put the dough on some baking paper and place it over the pie dish. If it's still a little small, roll it out a bit more, on the paper, until you're happy. Lower the crust into the pie dish, pressing into the edges, then add the filling. I used one of my favourites, a simple lentil and potato curry. (Make a fruit pie using a sweet dough, exactly the same way.)

Roll out the lid to the right size, then place it on top of the filling. I generally trim the pastry around the pie*, but last night, I simply folded the excess over the top crust. Place straight into the oven at 220C for 20 minutes, turning it round after 10.

*Use the trimmings, as they are, for breadstick-type nibbles.

I also made pain au chocolat, substituting a dessertspoon of sugar for the salt in the recipe above. The method is described in the link, with pics and a recipe for a yeast-risen dough - which does make for a better product in this case, IMO.

The chocolate I used was the 39p bar from Lidl - dairy free (of course) and Fair Trade.

If you have children around, that chocolate will last about 5 minutes - if you get them to help you make the chocolate rolls, it will occupy a morning, and you'll still have half a bar of chocolate left! :)